Meet our team
Grow Your Career with Us 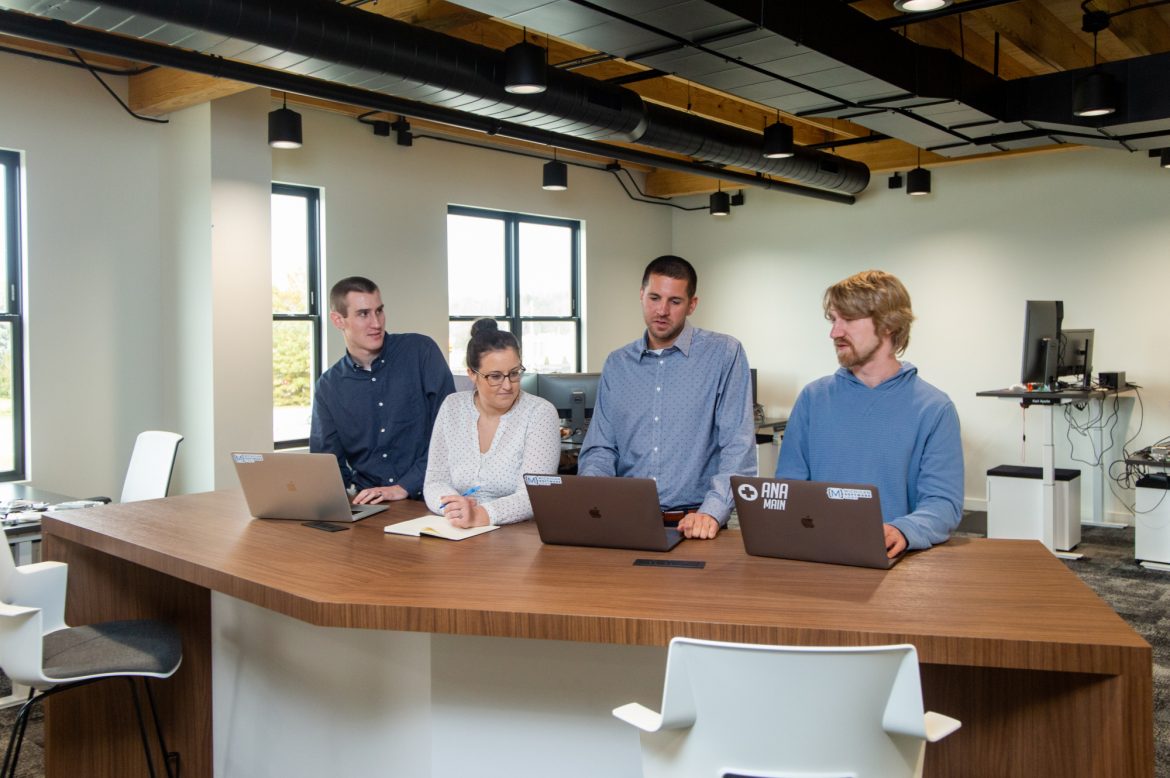 At MichiganLabs, we live our core values to better serve our clients.

The team at MichiganLabs is a talented group of software developers and UX designers with a focus on solving your most difficult problems.

Grow Your Career With Us

Alivia’s choice to work at MichiganLabs was based on the great culture, talented teams, and the ever-changing challenges she would face. For her every project offers a new and intriguing puzzle to solve. In the role of delivery lead Alivia loves being there to organize, bridge communication, and brainstorm solutions.﻿

Joshua Hulst is the co-founder and managing partner of Michigan Software Labs, creator of transformational software solutions for middle market and Fortune 500 companies alike. He is a graduate of the GE Edison Engineering Development Program, winner of the State of Michigan’s Code Michigan event, two-time contributor to the information security journal, and 40 under 40 winner from the Grand Rapids Business Journal.

Mark co-founded Michigan Software Labs around a simple mission: to build software for clients like we'd want it built for us. A frequent technology contributor for Forbes, Mark has been named one of the Grand Rapids 200 Most Powerful Business Leaders in West Michigan by the Grand Rapids Business Journal.

Amanda is a graduate of Grand Valley State University where she received her Bachelor of Science degree in Computer Information Systems. She was most recently in the logistics software industry at BluJay Solutions in Holland as a software developer.

Though she comes from a diverse background—a degree in biology and experience working as a data analyst and concert lighting technician—one consistent thread weaves through Erin’s whole background: her love of planning and organizing anything and everything.

Born in Romania, Iulia moved to Michigan when she was five, then to Grand Rapids in 2011 to pursue a graphic design degree from Kendall College of Art & Design. From there, she continued honing her ability to communicate design and intent. Her goal? To use her “design powers for good” to solve problems and make people’s lives just a little bit easier.

Jeff loves playing games of the card, board, and video varieties. He enjoys learning about new technology and keeping up to date with the latest smart-phone news. Recently, Jeff has been learning to use Sketch for app and icon design.

John is a creative and a perfectionist. He loves dreaming up ideas on how to make a process more efficient, a design more user friendly, or an app more intuitive. He enjoys keeping up with the latest home automation technology and someday dreams of having Jarvis live inside his home.

Josh is an avid Pythonist and Android developer. He enjoys writing tools that improve his productivity and the quality of his code, or contributing to one of many Open Source projects he uses on a daily basis. Josh indents with spaces, not tabs.

Chris has been in tech working with Apple products since Rhapsody Developer Release 1. He was one of the first people in the state of Michigan to use an iPhone while working for Apple. Finding ways to surprise and delight MichiganLabs' clients is his top priority.

While earning his degree in computer science at Grand Valley State University, Edric had the opportunity to work closely with his future employer on his Capstone project, an Android-based jokes app designed for kids. He then interned with Meijer where he helped create a pharmacy app before reuniting with MichiganLabs in the familiar role of software developer.

Joe Salowitz is a graduate of Calvin College. Over the past 10 years, he has been able to build a deep portfolio, consisting of a wide range of clients, from large-scale Fortune 100 and 500 companies like Whirlpool, Hitachi, Wyndham Worldwide, Houghton Mifflin Harcourt, Oracle, and Scholastic to cultural icons like Herman Miller, Capitol Records, University of Washington, Ace Hardware, and Meijer.

Joe is a graduate of Computer Engineering from Grand Valley State University and has been an avid programmer as far back as he can remember. Joe is a proficient programmer in C/C++, Java, and many other languages and is an enthusiast of all things technology. Joe has lived in Michigan in the Grand Rapids area his whole life, but enjoys travelling all around the world.

Josh received his Bachelor’s of Science degree in Computer Science from Grand Valley State University. After graduation, Josh worked in software development for BluJay Solutions in Holland where he developed a transportation management web application. He is experienced with the Agile/Scrum methodology and is skilled with Java, Kotlin, REST API integrations, Python, and React/Redux.

“I love working at Michigan Software Labs because of the amazing team and interesting projects.”

While earning his computer science degree from Kettering University, Aaron held leadership roles in his fraternal organization as well as technical and customer service roles for the local health system. These experiences served to make him a better communicator and problem solver with our software development team here at MichiganLabs.

Allison Bickford attended Grand Valley State University where she studied Computer Science. She was awarded the Eric Jon Gillette Memorial Scholarship by GVSU School of Computing and Information Systems. She is skilled in Java, C, C++, and Python.

As a Delivery Lead at MichiganLabs, Brittany works alongside teammates she describes as smart, humble, ambitious, and focused on what matters most: people. She loves being in a place where she can push herself to learn something new every day.

Jessica’s move to the tech side of the business world happened a few years ago when she landed a career as an Executive Administrator for a local digital marketing agency. Though her education, experience, and skills equipped her for a range of industries, she was drawn to the innovation and drive that comes with solving software challenges.﻿

Karl loves to play games and tinker around, which is why he reverse engineered Minecraft's lighting engine to support multiple colors! In between development and learning, you can find him volunteering his time at the Children's Hospital or the local Pokémon Trading Card League.

Ky is a current student at Michigan State University, where he is working toward a Computer Science degree. Ky loves creative problem solving and leaving no task unfinished. He loves coming to work every day because there is always something new to learn and something new to be solved. When not at work, you can find him at local eateries, playing videos, and working on programming projects of his own.

Kylie was practically born to help organizations run more smoothly. In middle school, her dad made her take four typing classes, assuring her it would help her land a job. While attending Brigham Young University, she interned as a planning technician for two nearby cities. Today with MichiganLabs, she creates a space that’s friendly and enjoyable for our employees and our clients.

Lisa was on a pre-med track at the University of Michigan for two years before taking a computer science class. The experience impacted her major and the course of her life. Hooked on software development from the very first moment, Lisa put her degree to good use creating an Android app for her parents’ business. At MichiganLabs, she enjoys making technology more helpful, friendly, and intuitive for a range of clients.

Before joining MichiganLabs, Mike was co-founder and software creator for Collective Metrics, a platform to help businesses and nonprofits make better decisions based on data. Prior to that, he built more than 30 websites through his company, Mike Mike, LLC.

At MichiganLabs, Pete enjoys collaborating with teammates on custom software solutions that make life better for users, and blow clients away in the process. Instead of improving user experiences for one company, he has opportunities to help many.

As a User Experience Designer at MichiganLabs, Ryan enjoys being on the front lines—building products that reduce pain points for end-users and maybe even bringing a little joy to their day. As he likes to say, “Reducing UX debt and increasing usability is the name of the game.”

After earning an economics degree from Hope College, Scott enrolled in a Python Programming course at the University of Washington. That’s all it took. While gaining a deep understanding of the software’s libraries, programming styles, and idioms, his love of development began to snowball.

Scott loves being on the bleeding edge of technology and overcoming new challenges. Always thinking about how a user would interact with software, he likes exploring new designs and imagining how they can be improved. He enjoys the learning process and gets excited about video game development.

After receiving a computer science degree from Calvin College, Tyler began his career developing web applications for a local software company. In addition to being a talented musician, he is versed in JavaScript, ReactJS, Go, HTML, CSS, and Python.

Mei received her master’s degree in computer information systems with honors from Grand Valley State University. She loves to challenge herself and learn new things all the time. She is passionate about building high performance apps to solve problems and with making those apps easy to use.
View Career Postings