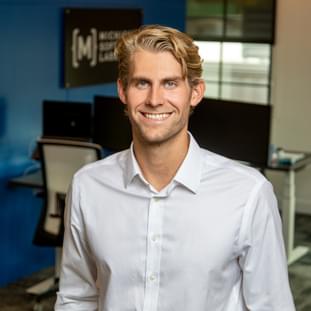 Technology hasn’t always been one of Ryan’s strengths. He can remember having a hard time even getting the television to work as a kid. There were just so many remotes and magical combinations of buttons to worry about. At first, he felt inept. But then he began to realize maybe he wasn’t the problem. Even at a young age, the seeds of UX were already beginning to form.

With a career goal of helping others have positive tech experiences, Ryan attended Calvin College. He then concentrated on the user experience while attending Lambda School for UX Design. There, he learned how to empathize with user pain points as a means of building better products, and ultimately creating greater value for businesses.

After college, Ryan worked in digital marketing, focusing primarily on Pay Per Click and Search Engine Optimization. On the side, he began coaching youth soccer for Midwest United FC as a way of giving back to an organization that made a positive impact on his childhood.

Today, as a User Experience Designer at MichiganLabs, Ryan enjoys being on the front lines—building products that reduce pain points for end-users. And maybe even bringing a little joy to their day. As he likes to say, “Reducing UX debt and increasing usability is the name of the game.”

Beyond opportunities to work on high-quality products for great clients, Ryan appreciates the lengths MichiganLabs goes to invest in employees. “They care deeply about building a positive work environment for everyone.” He’s also a big fan of our coffee and snacks. (Hey, at least he’s honest.)

Outside of work, Ryan spends time with family and friends playing games like Wizard and Euchre. When not binge-watching The Office, he can be found out on the soccer fields in the warmer months, and ski slopes in the winter. Like many of his MichiganLabs teammates, Ryan is a constant learner. In fact, he does his best to learn something new every day. And, with that, you’ve learned something new about Ryan.