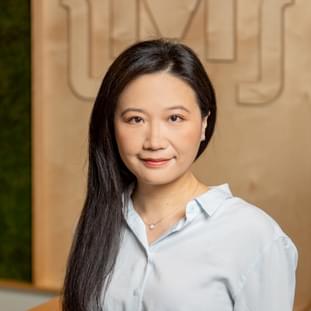 Xiaomei hadn’t planned on a career in software development. After earning a degree in bioengineering, she began her career as a sales engineer for image analysis systems, such as Karyotyping, Morphology software etc. She was amazed how software helped scientists and physicians solve complex analytical challenges, improve diagnostics, and increase laboratory productivity.

In 2009, her family moved to Grand Rapids. The experience prompted her to rethink her career. Xiaomei spent a year and a half in college, earning database and programming credits. It was a good fit. Once she completed these introductory classes, she enrolled at Grand Valley State University where she received her second master’s degree--this time in computer information systems. While at Grand Valley, Xiaomei became interested in mobile development and helped a startup build an app called Aghelp. The company was selected as the 2017 Grand Rapids Business Journals’ Newsmakers Award Winner.

Xiaomei loves building useful things and solving puzzles. At MichiganLabs, she helps solve complicated business problems using new and exciting technologies. She likes how much innovation is encouraged and differences embraced. Teams are deeply committed to improving the user’s experience and functionality.

On the weekends, Xiaomei’s family hosts game night. She likes to try different games, but Tichu is still her favorite. She also enjoys creating new recipes by exploring new ingredients and cooking methods. When disasters occur, her husband still manages to eat what’s on his plate.

In the last post, we discussed how do we optimize the UI system implementation by breaking down the design into smaller pieces, identifying the UI elements and components and using protocol-oriented programming in iOS.

How to Build a Better App UI Architecture - Part 2

At Michigan Software Labs, we don’t simply write code to satisfy requirements. We find ways to solve problems efficiently and effectively. Knowing that a well-structured application comes down to a set of techniques and patterns, I have been exploring design pattern theories and how they shape our thinking.