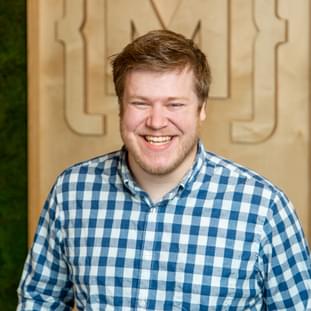 It all started with video games. As a kid, Tyler decided he wanted to be able to program them. So, he taught himself TI-BASIC during middle school math classes and Javascript during high school study hall.

While his interest in a game industry career began to fade, Tyler’s love of programming only increased. After graduating from Calvin College with a bachelor’s degree in computer science and a minor in music, he began writing code for a local web development company.

Tyler also put his analytic and problem-solving skills to use with various side projects. An example is the dynamic light show he helped create for his band's drum set. He also developed a web app for his father’s school district that tracks student performance in various behavioral categories.

Here at MichiganLabs, Tyler feels at home in an environment that emphasizes personal and professional growth. Opportunities to go deeper into tech are abundant and highly encouraged. There’s also a focus on teams working closely to overcome challenges. Great minds work well together.

Outside of work, Tyler writes, arranges, and plays music. His primary instruments are tenor saxophone and piano, but he’s been known to pick up the ukulele, accordion, melodica, and EWI (electric wind instrument, for those not familiar). When not heading up an indie rock band, he enjoys video games, board games, and pen-and-paper RPG’s with friends. And did we mention crochet? Yep, Tyler learned how to do that, too.

Looking for a Front-End Framework? Our View On Vue

The programming world has always had its share of opinions. Our community loves debating everything from tabs vs. spaces to Vim vs. non-Vim to which frontend framework you should use. For me, the answer almost always comes down to: “Whichever, so long as it’s consistent across your project.” End of article. Thanks for reading!